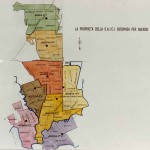 The landscape around Torviscosa is the result of land reclamation carried out in the ’30s, and still bears its geometric stamp: wide, regular plots of land, suitable for extensive cultivation and divided by long, straight canals that collect karst spring water, or by shared access roads. At the time, the SNIA divided agricultural property into 6 farm units. Each one was managed by a farm, which was made up of series of residential and production buildings. In some cases, the farms were born out of an agricultural nucleus that existed before the creation of Torviscosa.

Farm no. 5, for example, was built out of farm buildings dating back to 1860, designed according to the usual rural architecture of the area: a residential building on several levels with a large entrance to the farmyard and rustic annexes for stables, barns and storehouses. In other cases, the farms were created in the ‘40s following a concept of the farm as an independent nucleus, with adequate spaces for work and residents. Around a large, inner rectangular courtyard with a central laundry and drinking trough were buildings used as homes, offices, storehouses and barns. Some farms, for example, no. 1, even had a small church.

Your ticket for the: Agricultural Development